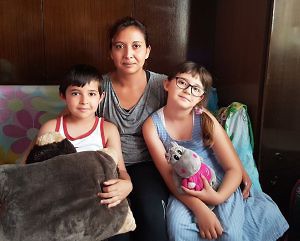 Gergana is nine years old. She lives with her mother, Ivanka and her younger brother, Boris, in a town in the South of Bulgaria. Their flat has only one bedroom and very little furniture but they are safe and they are together. After all that they’ve been through in recent months, that is what counts.

Eventually, Ivanka found a flat to rent but life was a daily struggle. Their only income was the welfare payments that Ivanka received for the children but these barely covered the rent and the electricity bills. There was almost nothing left to pay for food or clothes. Just as they were trying to come to terms with the death of their father, Gergana and Boris were at risk of being separated from their mother and sent to an institution.

This is how things were for Gergana and her family when they first met Veneta.

Veneta is a  regional co-ordinator for Hope and  Homes for Children’s team in Bulgaria. She doesn’t have an office. She works on her phone, from her car so that she can respond quickly and flexibly to help families in crisis. Often, the help she provides is small scale – bedding, clothes, nappies or basic medicines.  What matters is that it comes at the right time.

Veneta helps Gergana’s family to pay their rent and electricity bills. If she sees that the kitchen cupboards are bare, she will buy them essential groceries. These small interventions really can make the difference between a family surviving a crisis or children being taken from their parents and put into an institution.

Gergana has a sight impairment which requires regular treatment and prescription glasses. She loves school and she likes to colour and draw but she was struggling to cope with a pair of glasses that were heavy and ineffective. Veneta helped to arrange new glasses for Gergana. They are much lighter and prettier than her old ones but more importantly they mean that she can see properly at school. When we asked Gergana if she was happy with them she replied enthusiastically in English,”Yes!”

Through Vaneta, Hope and Homes for Children are giving Gergana and her family the practical and emotional support they need right now and it’s clear how much this means to them.

Recently, Gergana told Veneta, “The list of people I love is very short but you are on it. When I grow up I want to do what you do and help people,” she added.

Her mother, Ivanka, says simply that, without Vaneta’s help, “My children would be in care and I would not be alive.”

Now that Gergana and Boris are settled in school, Ivanka is hoping to find work in a local hotel. Hope and Homes for Children will continue to support the family until their future is more secure.