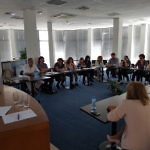 20 representatives of local and regional structures, director of Child Protection Departments and social workers took part in the Regional round table, titled “Challenges and successes in the direct work with children and families at risk in Sofia District” organized by Hope and Homes for Children – Bulgaria in the city of Bankya.

The event began with an opening speech by the executive director of the organization, Georgi Simeonov, followed by a greeting from the programme coordinator of HHC – Bulgaria, Boryana Klimentova. Afterwards, the floor was taken by the local coordinator for Sofia and Sofia District, Valeria Draganova. She presented the work of the organization on the territory of Sofia District, stressing out the importance of mutual cooperation, work together with the CPDs and the model of Active Family Support that HHC – Bulgaria has been using in its work with children and families at risk. “Working with you is not work, its pleasure, because we work so well together and things just happen”, said Mrs. Draganova.

During the first day of the Regional round table, participants exchanged a lot of experience by discussing specific cases they have encountered, as well as by discussing the work in partnership with HHC – Bulgaria. The good cohesion, developed both by the organization and by the different CPDs, could be seen simply by the way the discussion was going and the fact that everybody openly stated how important this partnership is and how much easier their work has become as a result of the great cooperation.

The second day of the Regional round table was focused on discussing the processes and steps, which Hope and Homes for Children – Bulgaria is taking, whilst working with the CPDs and how this professional method can be improved or made easier, after which the conversation shifted over to the model of District DI Coordination Mechanism, developed by HHC – Bulgaria and included in the updated Action Plan for the implementation of the National strategy “Vision for deinstitutionalization of children in the Republic of Bulgaria” as a coordination method. Participants showed incredible interest in the instrument and had multiple questions regarding the way, in which this coordination mechanism is formed, as well as how different responsibilities are being assigned and how they are afterwards being checked on. The national coordinator of HHC – Bulgaria for South Bulgaria, Kremena Stoyanova, as well as the programme coordinator of the organization shared HHC – Bulgaria’s experience with the mechanism and stated their complete readiness in facilitation the formation and management of this mechanism in Sofia District until the system of coordination can start working well on its own.

The event ended on a very positive note. Participants stated that the informal format of the Regional round table, the professional attitude of all organizational representatives, their readiness to assist and support and the high quality of the information delivered are the reason they participated actively in the discussions.