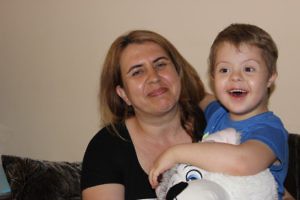 Petya and Ivan Petrovi spent years longing for a second child. But when their second son, Georgi, was born, in October 2012, the midwives and doctors at the hospital behaved as if something terrible had happened. It was three days before they even allowed Petya and Ivan to see their new baby.

Georgi had been diagnosed with Down’s Syndrome and the medical staff told his parents that this meant they would never be able to care for him. It would be too expensive, it would be too difficult. They might even endanger his life. Petya and Ivan had never heard of the condition and neither had any of their family or their friends. In Bulgaria, under Communism, people with disabilities were hidden away from the rest of the community and rarely seen. The effects of that policy are still felt today in terms of attitudes towards people with disabilities and special needs.

Petya and Ivan were heartbroken but, under pressure from the authorities and with nowhere else to turn, they agreed to allow Georgi to be placed in an institution. They also gave  consent for their son to be put up for international adoption, hoping that perhaps Georgi might have a better life abroad.

Once he had been transferred from the maternity ward to the institution, Georgi spent long hours alone in his cot. These institutions are highly medicalised places where the white-coated staff focus on the children’s physical health with little or no attention paid to their wider needs.  Like most of the children with special needs, Georgi was routinely fed through a tube and denied the comfort and stimulation of being held and taught to feed normally.  But even though Petya had agreed to allow the authorities to try to find a new family for Georgi, she could not give up on her son. She visited him every day, desperately trying to maintain their bond and to let him know that he was loved.

After Georgi’s birth, normal life in the small flat that Petya and Ivan shared with their teenage son, Todor, had come to a standstill. The family was traumatised and Petya cried constantly. Georgi’s grandmother decided she had to find a way to help. A neighbour had told her about an organisation that worked to reunite children from institutions with their birth families and eventually she managed to make contact with Hope and Homes for Children.

Kremi, a member of our expert team in Bulgaria, met with Petya and spent two hours listening to her fears and her pain – emotions she had not wanted to share with her husband or her older son. Then Kremi gave Petya as much information as she could about Down’s Syndrome and explained the therapies, treatments and support that would be available if the family chose to care for Georgi themselves. She said that Hope and Homes for Children could put her in touch with other families who were caring for children with Down’s Syndrome and reassured her that the expenses would not be as great as the family had been told. She also told Petya that they could call her for support, 24 hours a day.

Perhaps most crucially of all, Kremi reassured Petya that just like other children, every child with Down’s Syndrome has their own unique potential to develop and enjoy their lives. “Georgi will make you smile more than he will make you cry,” she said.

Kremi suggested that Petya take some time to talk things through with her husband and son and to decide what to do. But Petya could not wait that long. She called Ivan at work and told him what Kremi had said. Two hours later she called Kremi back and told her, “I want my boy”.

Hope and Homes for Children helped Petya and Ivan with the paperwork needed to bring Georgi home. Our team in Bulgaria made sure the process for reintegrating children from institutions with their families was carried out as quickly as possible. When Georgi was six months old, Petya and Ivan brought him home.

Today, to describe Georgi as a happy little boy would be an understatement. He is a joyful child. He is confident, sociable and full of energy and fun. Petya says that he loves to swim and enjoys fishing. He’s  very keen to show visitors the medals and the cup he won in a recent competition – one for the biggest fish and one for most fish caught.

Petya also says that Georgi has a wonderful connection with his older brother, Todor. Georgi searches the house for Todor when he is away at college. Their relationship is helping Georgi to develop because they play rough and tumble together and Georgi tries to copy everything that Todor does.

Over the last four years, Hope and Homes for Children has provided speech therapy for Georgi and arranged consultations with specialists to make sure that he gets the medical treatment he needs. We have also helped Petya and Ivan learn how best to support Georgi and encourage his development. In addition, we have arranged psychiatric support for Petya to come to terms with the distress and guilt she feels about the circumstances of Georgi’s birth and the time that he spent in the institution.

“If Georgi had stayed in the institution” Kremi says, “he would have spent almost all day, every day alone in a cot. He would not be able to walk or talk. He would still be being fed through a tube. He would almost never have been taken outside.”

“Instead today he is really great. He is walking and running, he is learning to speak and he is getting ready to start nursery.”

In August 2015, Hope and Homes for Children, in partnership with the local child protection authorities, closed the institution where Georgi spent the first six months of his life. We did this by finding safe, loving, family-based care for all one hundred children who lived there.